When coming to Phu Quoc island, besides the tourist and entertainment sites such as Long beach, Thom beach, Tranh stream, etc, travelers shouldn’t miss the meaningful historic sites. One of them is Cay Dua prison that is a symbol of the indomitable mind and the great patriotism of the communist soldiers during the fights against the invaders. It will be a shortcoming to visit Phu Quoc island without exploring this special national relic. 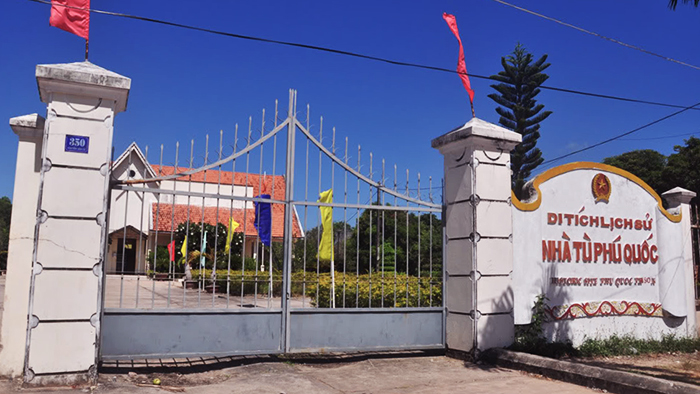 Cay Dua prison (Coconut tree prison) which is also known with the name of Phu Quoc Prison is located in An Thoi Town, Phu Quoc island. The name “coconut tree” stemmed from the Indochina War when French colonial administration was dominating Vietnam and the opposite war against French becomes very fierce. At this time, the prison had four zones named “A”, “B”, “C” and “D”; which was strongly believed to keep over 14,000 detainees. However, when the Indochina War finished, most of the detainees were released according to the Geneva Accords.

When the Vietnam War started, the American troops reconstructed this place into a new prison but kept the initial name. The new prison included separate zones for men, women and the elder. In 1966, a new part of Cay Dua prison was built to imprison more Vietnamese communist soldiers. This new part had 12 main zones. Each zone was divided into four different sub-zones “A”, “B”, “C” and “D”. The protective security was extremely tight with strict supervision all the time. Vietnamese prisoners suffered from the rigid rules. They had to work strenuously in the daytime and lived with the poorest condition in this prison.

Cay Dua prison closed when Vietnam gained the independent from American in 1975. In 1993, it was recognized as the Vietnamese National Historical site and in 1996, it was opened to the public. Nowadays, Cay Dua prison is one of the most famous places for tourists when coming to Phu Quoc Island. 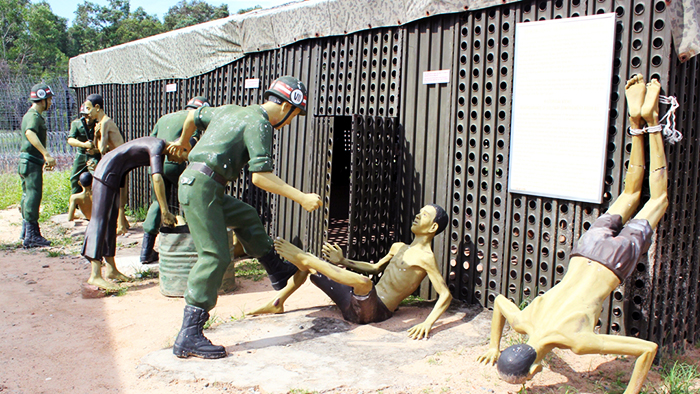 A scene during the war represented in Cay Dua prison

Visiting Cay Dua prison, travelers have a chance to witness the War Crime. The prison exhibits many objects about Vietnamese prisoners who had to suffer from the inhuman rules as well as how French and American army torture Vietnamese detainees. They used many cruel ways to torture including Tiger cage, electric shock, boiling detainees to death, crucifixion or pop the teeth with the hammer, using high-capacity headlights to illuminate in the eyes, etc.

Prisoners of war were brutally tortured. From 1967 to 1973, 4,000 prisoners were estimated to die and thousands became disabled forever. There were many barbaric ways of torture. Detainees had to suffer from pre-emptive attacks prior to confession. They were severely beaten. The jailers hang the prisoners on hot steel scaffoldings, then beat, or shut them. The prisoners also had to climb up and down the thorny trees. Prisoners were kept in the tiny and hot containers. The prison guard smashed the prisoners' fingers and toenails and broke their teeth. 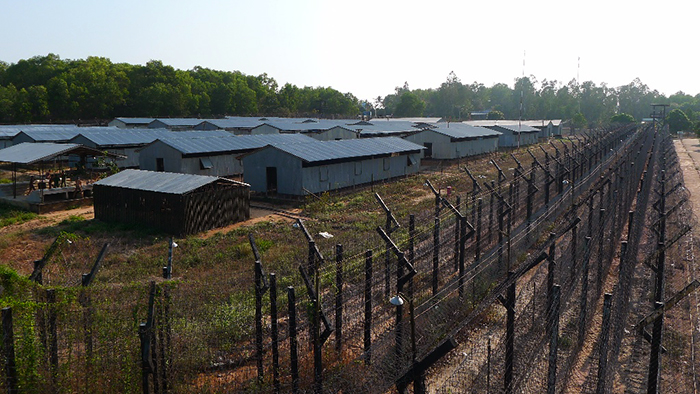 The location of the prison

A significant site of the prison is the Tiger cage, which is covered with barbed wire. When being detained in this cage, prisoners couldn't stand, sit or lie down because if they moved they would be scratched and injured by barbed wire. Due to being closed all the time, the cage was completely dark and it is harshly hot in the morning while extremely cold at night. After being released from the Tiger cage, lots of prisoners were blind. Their physical and mental health were strongly affected.

When it was hot, the prison guards put a furnace next to the detainment room whereas when it was cold, they poured more water into the container. The guards even nailed in the ankles, knees, and even the head of the detainees. Excavations which were carried out to search for soldier remains noticed some 10 cm-long nails in knee bones, leg bones, and skull.

During that time, thousands of prisoners lost their lives in the prison since they couldn’t stand tortures. However, the more the prisoners were tortured, the more determined to stand up and fight against the enemy they were. With the courage, intelligence and resilience, the detainees dealt with them in different forms of struggle on the different levels by some particular actions such as dividing the enemy ranks, finding or making the tunnel to escape, etc. 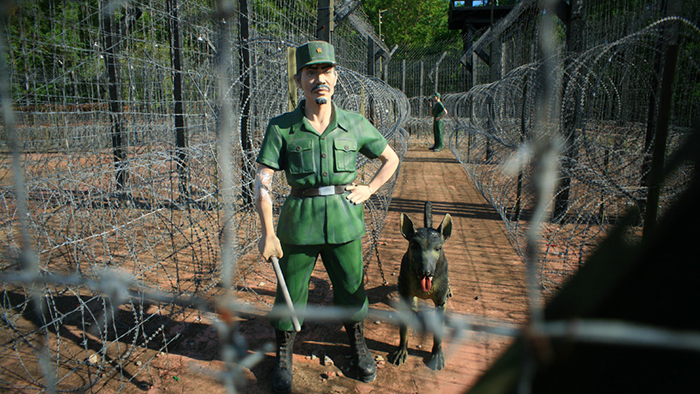 The haunting inside Cay Dua prison

Annually, Cay Dua prison greets thousands of travelers to visit. They are both former detainees to return the site where they were captured and spent a part of their life before; and visitors of all ages from all over the country. There are also lots of foreign tourists visiting this monument. Exploring Cay Dua prison, visitors can't help admiring the staunch spirit, the indomitable mind as well as the great sacrifices of the revolutionary soldiers.

Cay Dua prison is not only a living museum, revealing a mournful but heroic period of Vietnamese history. but also the evidence of colonialism, imperialism, and above all, the indomitable will of Vietnamese revolutionary soldiers. Do not hesitate to explore Cay Dua prison and get unforgettable experiences.