If you are a person who likes to explore the culture of a place, Phu Quoc is the one you should not ignore because it offers more than beautiful beaches, wild nature, or abundant seafood.

On the island, there is a way for you to both learn the culture and join the best activities here. It is traveling to Phu Quoc on the days of traditional festivals of indigenous people.

If you get the chance to travel to Phu Quoc, do not miss to see these festivals below.

6 most interesting festivals in Phu Quoc

This is an annual festival starting from 1996 onwards since the temple of Nguyen Trung Truc was built in the commune. This festival plays a special role in the life of the local people, contributing to preserving and promoting the traditional cultural values of the nation.

The organization of the festival also show the morality of remembering the merits of predecessors, educating the revolutionary tradition for the present and future generations.

From August 27 of the lunar calendar, many people come to the temple in Ganh Dau commune, nearly 40 kilometers from the center of Phu Quoc island to attend the festival.

The ceremony part is held solemnly to ensure the traditional rituals of the nation. For the festival part, there are art shows and outdoor folk theater games in order to recreate the history and image of Nguyen Trung Truc.

The aim of performances and folk games is to strengthen the solitary and attachment of groups in the community and ensure the culture imbued with national identity. 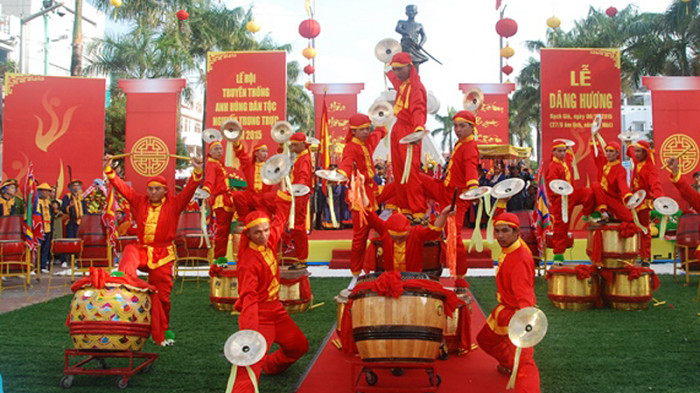 According to the people on the island, the temple is the belief of the locals to Mrs. Kim Giao (the national hero Nguyen Trung Truc’s wife).

Annually, on the 18th and 19th of the first lunar month, people pour to the temple to pray for the good things, happiness, and good harvest. Coming to the festival, you can enjoy vegetarian dishes and Phu Quoc’s specialties.

Nghinh Ong festival is a traditional folk festival held to honor “Lord of the fish”, also known as the Nam Hai Navy that attracts many people to attend. Nghinh Ong festival is the popular custom of worshiping Fish Lord from Quang Binh to the South (including Phu Quoc), which is one of the biggest festivals of fishermen to pray for the calm sea and lucky things.

The festival also has many different names but all have the same notion that the fish lord is a sacred creature in the sea, a savior for fishermen and maritime occupiers in general. This has become a popular folk belief among generations of fishermen. 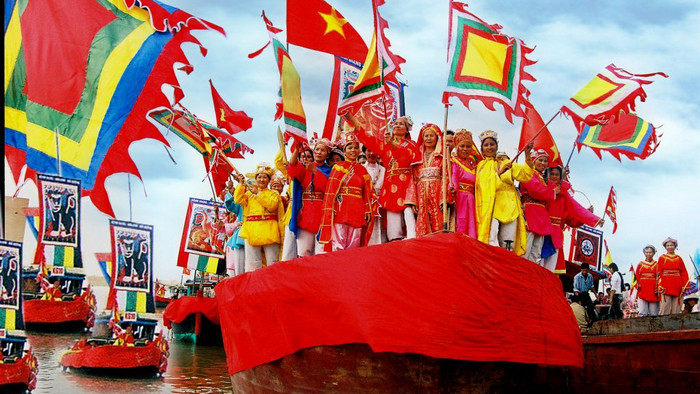 Along the procession way, fishermen and locals present offerings to welcome them. Together with the dragon boat procession, there are hundreds of large and small boats which are decorated with splendid and brilliant flowers and flags. In front of the boat are the incense and the offerings. The small boats carry guests and local people to attend the procession. They then return to the departure port. At that place, a group of the lion dance is waiting to welcome him to the tomb.

Before the festival, hundreds of fishing boats anchor in the river wharf. The festival part includes the procession and solemn rituals.

Boat racing festival in Phu Quoc is held annually which attracts a lot of visitors. This festival has been known more thanks to tourism activities and takes place at Dinh Cau beach. Both locals and tourists are attracted by the lively atmosphere of this festival. This not only helps Phu Quoc promote traditional culture but also promotes the tourism of the island.

This festival is also an opportunity for Phu Quoc people to practice and challenge the toughness. 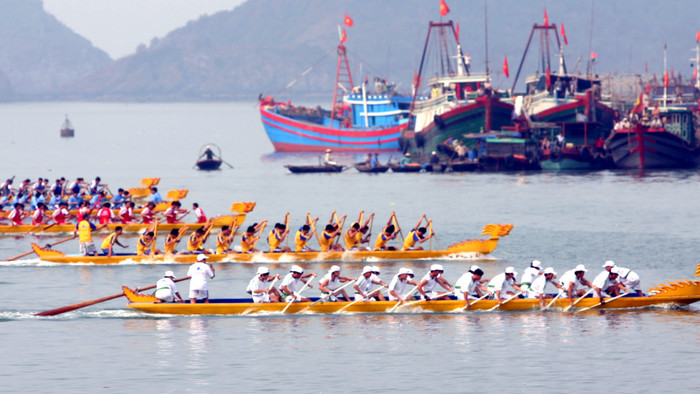 This festival is held on 10th and 11th the first month of the lunar calendar at Duong Dong Shrine on 30/4 Street, Quarter 1, Duong Dong Town, Phu Quoc.

Duong Dong Shrine festival is an indispensable culture of the people here. It is organized to commemorate those who established villages. Although it is only local, this festival has been growing and presenting the beliefs and cultural characteristics of the coastal people. Coming to the festival, participants can enjoy the unique cultural performances of the Islanders. This will be an opportunity to learn about the local culture.

Sung Hung is an ancient temple located near Dinh Cau. Inside the temple, there are many worshipping areas of Chua Xu, the statue of Nam Hai and the national hero Nguyen Trung Truc. Although it was built at the end of the 19 century, the temple still retains its own character and sacred value.

We hope that through these festivals, Phu Quoc will become more attractive and would be ideal for your next holiday. Besides that, Phu Quoc also has numerous interesting things to do waiting for you. Visit our website to get more information about Phu Quoc tours or leave any question. If you find this article useful, share with others. Thank you!